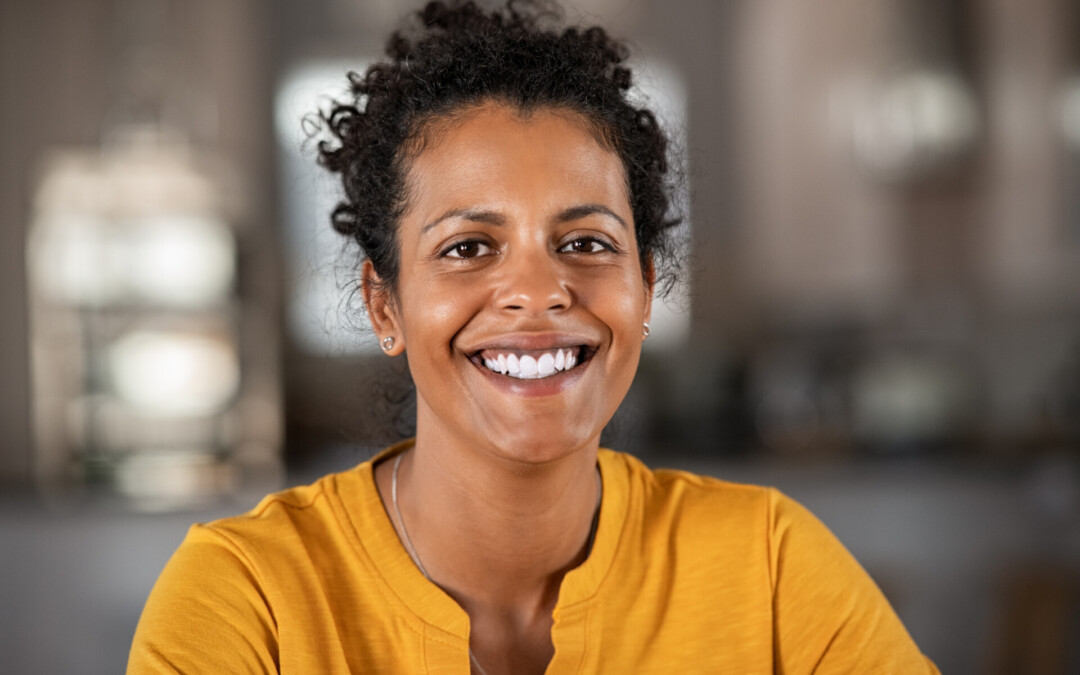 Brittney found restoration and reconnection with God at Mel Trotter

Brittney started working at Mel Trotter Ministries as an Intake Specialist in September of 2021. But that wasn’t the first time this native Chicagoan landed in Michigan—or at Mel Trotter.

Before Brittney began working at MTM, she accumulated a great deal of factory experience, working for many years in the manufacturing industry. She also came from a very large and loving family in Chicago. “My parents were married for over 30 years,” she said proudly. However, much like everyone’s familial journey, it wasn’t always an easy part of Benita’s story.

Her father, Harvey Bass, was married to her mother (Denise) for three plus decades. Harvey was actually Brittney’s stepfather, but as she will tell you, he was the only dad she ever knew. “He was strong, the best ever,” she said. “He only missed work a handful of times; he was the family rock. Our dad would wake up, take us all to school, go home and make a big pot of beef stew so it was ready for us for dinner.”

Brittney’s mom worked during the day while Harvey worked third shift. “He slept very little,” she said. In fact, when Brittney was fifteen and had her first child, a son Quinton, it was her dad who helped her the most. “He insisted I still be a kid, he let me have my own childhood,” she recounted, saying she attended all three high school proms. Harvey took Quinton to school and Brittney to work, all while working full-time himself—and doing everything at their church.

“He was president of the church choir, chairman of the trustee board, he took care of the cleaning, the vending machine, everything!” she said. “That was his service to the Lord.”

What Brittney also reiterated at this point of her story is, quite simply, God. She knew God, she loved God, and her family demonstrated the importance of a relationship with the Lord. However, just like so many individuals along the course of their journeys—when enough life knocks you down, it often interrupts that relationship.

Brittney and her siblings spent their formative years together in Chicago, but she moved out of the house early on and headed west to California. Her younger brother, Terry, remained in the family home in Chicago. Brittney came home to visit everyone within her first year of being in California, and that’s when she found out Harvey had ALS.

“Seeing him in that condition, he was the family rock, and now the rock was sick,” Brittney said. The stress and pressure of Harvey’s illness led Brittney to stay in Chicago, choosing not to return to California. She was 23-years-old at the time. Her older sister, Tammy, had recently moved to Michigan. But it was Terry, then just 17-years-old, who struggled greatly with their dad’s ALS diagnosis.

“Dad was still able to walk, but he was falling a lot, then he was in a wheelchair,” Brittney said. “He had no dexterity in his hands, to the point he couldn’t even pick them up to feed himself. He deteriorated quickly.” By this time, Brittney had another child, a daughter Kye. When the three of them (Brittney, Quinton and Kye) were living in Chicago, helping to care for Harvey, it gave Brittney a front row seat to her brother’s difficulty in dealing with things.

“Terry couldn’t handle dad being sick. He was 17, trying to find his identity and just live life,” Brittney said. That’s when she received a phone call from their mom that would change everything.

While that part was true—Terry hadn’t been in a car accident—Denise’s premonition that something bad was about to happen with him was also true. He and his friends were outside arguing with people, and one of Terry’s friends handed him a gun. Terry started shooting. No one was hit, but that is when Harvey told Brittney to drive Terry to Michigan to stay with their sister Tammy. Harvey knew in order to preserve Terry’s life, he had to leave Chicago. It was no longer safe for him to be there.

Brittney dropped Terry off that same day and returned to Chicago. “Everything seemed okay at that point,” she said.

As their lives continued, Brittney sadly admitted she didn’t see Terry that often. She was busy being a mom and now wife to Alonzo, along with going to school. After several years of not much interaction between brother and sister, Brittney received a call that Terry had been shot. She and their mom rushed to Michigan to see him.

Miraculously, Terry survived. Yet it was what Brittney realized after all those years apart that would change her trajectory: she hadn’t ever gotten to know Terry’s eight sons, her eight nephews.

“I knew that he had kids, of course I did. But I didn’t really ‘know’ them, you know?” Brittney said. “They were family I didn’t know.” That relationship had also been interrupted by everything life had thrown at them.

Terry asked Brittney for help. He said, “Sister, can you come down here and stay a little while and help Sherita (Terry’s wife) with the kids?”

Brittney agreed to stay for a while. Their kids, while cousins, were totally opposite according to Brittney. Her children were intellectually inclined; Terry and Sherita’s were athletically inclined. It took some adjustments, but Brittney began staying with them more and more. It was during this span of several years that Brittney and Alonzo’s marriage began to crumble. Brittney moved back to Chicago and eventually, after a divorce, lived on her own with her son Alonzo Jr. and daughter, Alana.

However, after a time, things were not going well—Brittney did not feel safe. One day, she was living in an apartment in a “bad neighborhood” in Chicago and she decided it was no longer conducive to stay there. Having spent so much time in Michigan over the years, Brittney felt comforted by its safety and familiarity. She looked at her then boyfriend and said, “I’m moving and going to Michigan!”

Their courtship was serious and he agreed to move as well, securing a moving truck for Brittney. The plan was for her to move to Grand Rapids first and live with her brother Terry and his family until she found a place of her own. Much to Brittney’s dismay, the same day she and her boyfriend picked up the moving truck and arrived at Terry’s home, he and his family were packing up their belongings and moving to his sister-in-law’s house—they had received a 24-hour eviction notice earlier that morning.

Brittney ended up staying in hotels, burning through all the money she brought with her.

“I brought my whole house, my whole life, just put it in the truck and then put it all in storage…where am I going to go?” she said.

Alana was with Brittney; Alonzo was a junior in high school so he stayed in Chicago with his older brother, Quinton. After Brittney’s money was exhausted, she didn’t know what to do.

“I was just lost,” she said. Brittney began asking local people about options. It was her sister-in-law who told her about Mel Trotter. She remembers arriving at MTM on a weekend, and by Monday, “they had a place for us.”

“I was scared…I was so afraid, because my idea of a shelter was a big gymnasium holding your kid real close!” Happily, that was not at all what Brittney and Alana came to know during their time at Mel Trotter.

“I was very pleasantly surprised and relieved,” she said. “We got our own room and bathroom. I had time to think,” she said.

But even more surprising in the moment to Brittney, was how God continued to show up in her life. Never forgetting her roots and the deep faith her parents modeled to her, Brittney’s life continued to transform. From deep within, she knew God was doing a great work in her.

During this time, Brittney’s boyfriend had gone back to Chicago. There was no animosity; rather, he had been very helpful to Brittney and Alana and simply had to return home to his mom’s house. Realizing things were in motion, and sensing God working in her life, Brittney said to herself, “We’re at Mel Trotter, now I gotta get a plan!”

She needed a car and a job, but said, “I didn’t even know where to look.” Continuing to settle in at Mel Trotter, she met with her case managers and thought intentionally about the future. Brittney and Alana began going to church every week with Terry, who was the drummer at his church. One Sunday, after he got done playing, Terry sat next to Brittney and said, “Why don’t you come to the altar with me?”

Hesitantly, she went up front with her brothers and a few others. The pastor said, “I want to start with you, Brittney. You came here to change your life, didn’t you?”

Brittney was blown away! The pastor asked if she wanted to recommit her life to God, and she did—it had been happening all along. “Mel Trotter helped me find God again, I can’t tell you how much that time helped me,” Brittney said.

Before they left church, Brittney met a woman who told her to call the number she provided and say, “My cousin Bonnie gave me this number to work.”

The opportunity ended up being a job to drive the “Go Bus” to take individuals to their appointments. Brittney had never driven a bus before, but “that was the first move of God that I recognized since recommitting my life to him, and from that point on, everything started changing.”

Today, Brittney works at Mel Trotter Ministries and lives in the same 3 bedroom house that was offered to her through an ICCF program in 2014. Her daughter Alana goes to Grand Rapids University Prep and has been dually enrolled since last year, knocking out both college classes and her advanced high school courses.

“I knew it was God who put that feeling into me during that time at Mel Trotter. He was separating me from my life’s chaos—and wanting me to stay longer so I could learn and eventually be on staff and help others like I received help. He guided my steps…every step of the way.”

September 13, 2021 will forever be Brittney’s “official” first day at Mel Trotter Ministries, and a part of her story just as it is for so many others. On the other side of chaos and uncertainty and homelessness, Brittney can see clearly how her steps were being directed.

“God changed my attitude, my mind, and my heart when I stayed at Mel Trotter. It wasn’t just a shelter, it was a time to reconnect with God and for Him to show me how to grow and connect with others so I could be who God called me to be.”