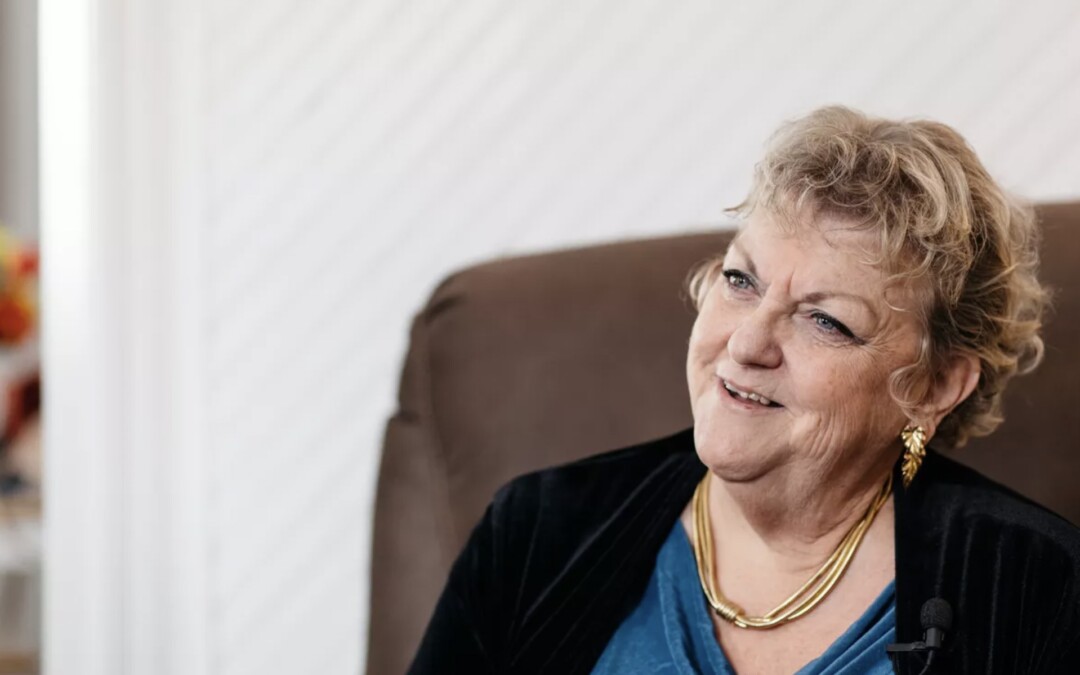 Raised on a fruit and dairy farm in Sparta, Michigan, Mary Williams grew up attending church with her large family. If the church doors were open, the family was there.

“I came to know the Lord at age ten and was baptized at 13,” she fondly remembered.

With a full and busy home in the country, Mary closely shadowed her mother and learned how to be a homemaker at a young age.

“There were nine sitting at the table, my grandfather lived with us and so by the age of eight my mother had already taught me how to make apple pies and cook for the family. Still to this day I have trouble making small meals; I want to cook for an army,” Mary laughed.

A blanket stitched with the name “Mary” laid over the back of her comfortable reclining chair as she sat in the living room of a rental home for women.

With a smile on her face, and a warm comforting voice, she continued to share the circumstances that led to an unexpected season of addiction and homelessness.

For the past thirty years Mary has been a pastor’s wife. Together they ran a rescue mission and poured their lives into street ministry around the state of Michigan.

“My brother in law was the chaplain at Mel Trotter and one day he called up my husband who was pastoring a church in Benton Harbor and said ‘We have some extra food and winter coats, could you use them?’ So we took the truck up to Mel Trotter and we loaded it up and went back to the projects in Benton Harbor and handed out the food and that was the start of the rescue mission work.”

After seven years, God called Mary and her husband to a church in Flint where they started building relationships with people on the streets.
“We had a 40 by 80 tent and we would – in the summer – set it up in Pontiac, Flint, Detroit, Mount Clemens, wherever we could set it up, and we would give clothes and food away and we would sing to the crowd and share testimonies and preach. Sometimes my best friends were hookers and drug addicts,” she laughed. “But you know they were just people hurting, just like me.”

In 2011, Mary’s husband Tom was shot while doing street ministry in Flint.

“He was mentoring a guy who was a drug addict and he was high on drugs and got mad at Tom and shot him.” Mary found out about Tom’s injuries when she listened to her voicemail after a work shift as a school bus driver.

“He said ‘Mary this is Tom, I’ve been shot.’ I thought ‘oh my God’ and I immediately started calling hospitals to find out where he was.”

Mary’s husband was paralyzed from his injuries – permanently wheelchair bound. Her faith was tested like never before when the doctors told her that her husband had an internal medical issue that was incurable. He was septic.

Mary talked to God and made a plan to let Tom go.

“It was two days before we were going to pull the plug because he was on full life support. I was in the hospital and the doctor said ‘You won’t believe this, he just made a complete about face and he’s going to get better’.”

Mary had been sharing her faith with the doctor who couldn’t medically describe this type of turnaround. “I said ‘well that’s God for ya’ and he said ‘well it has to be God because there is no other medical explanation for this miracle.’”

It was one of the many times in Mary’s life that she put her total faith in God and He showed her His faithfulness.

“Oh yeah, I’ve had lots of times in life where I’ve just had to put my total faith in the Lord, but leading up to my addictions, I decided I wanted to take a sabbatical.”

Mary was the full time care taker for her husband and also caring for her adult daughter who has special needs. She had to retire early to focus on her family. She also drifted from the most important relationship she had.

“I decided I was going to take a break from God. I didn’t read my Bible, didn’t go to church, I just existed. And you open the door for Satan when you do things like that,” she sighed heavily. “And I did.”

The pressure grew and it took a toll on her mentally, spiritually and physically. She was overwhelmed and isolated.
“It was very hard to be there day in and day out. My husband had to have complete care, I bathed him and changed his diapers. It was wearing me down because he was getting heavier in the wheelchair without exercise. He kept falling. I had ambulances out or the fire department quite often. They knew us by first name.”

In 2018 Mary needed a hip and knee replacement. She numbed all her pain with the narcotics her doctor gave her. It wasn’t long before she realized it numbed the emotional pain, too. Each pill gave her a short term escape from what she thought was a hopeless situation. She was addicted.

“When the pain meds ran out, after 40 years of not drinking, I started drinking and had a problem with that, so I had two addictions.”

It was a conversation with her daughter that opened her eyes to how the stress and addiction had consumed her.

“One of my daughters said ‘mom you really just wanted to kill yourself,’ and I never thought about the fact that by taking alcohol and pain killers together that I could’ve just gone to sleep and never woke up,” Mary realized.

But God had other plans.

After a hospitalization and psychological evaluation, the doctors released her back to the place she knew through her chaplain brother in law. Mary entered the Step Up Recovery program at Mel Trotter Ministries in March of 2019. As she entered the doors, she couldn’t help but reflect on the fact that she was living with – and healing with – a group of people she once devoted her ministry life to.

“Being that I used to come up to Mel Trotter as a pastor’s wife with my husband to get food for street ministry and now I was going there as a client with addictions, it was just humbling. It was at Mel Trotter Ministries where I was able to find reconciliation with the Lord. It doesn’t matter where we are. God still loves us and cares enough.”

God carried Mary through the addiction recovery program and other classes at Mel Trotter Ministries where she was able to build relationships and establish a strong faith community again. Through a renewed relationship with Jesus Christ, Mary discovered that she was beautiful and made in the image of God. She worked through past abuse she suffered and the low self-esteem she had dealt with since the age of five.

Mary found community at Mel Trotter Ministries and friends she never would have expected to meet. She re-discovered how crucial relationships and ministry are in her life.

“I’ve met prostitutes, transgender and homosexual people and people from all walks of life and God says, I’m not to judge. The word that I’ve known all my life says let your light shine and I was trying to do that even though I was in addiction.”

After graduating from the 90 day recovery program at Mel Trotter Ministries, Mary took another step toward independence. She moved into the MTM Melanie’s House – a home for women where she can stay connected to a case manager while working to secure a more permanent apartment of her own.

“I would like to tell donors, volunteers and anyone God has called to serve, that you don’t have to be a pastor’s wife, or a missionary. Giving of your time, prayerful support and other resources has gratefully benefitted myself and so many others and I thank you for it! I just know that you are never too old to be used by God and I pray he continues to shine his wisdom and peace upon me.”